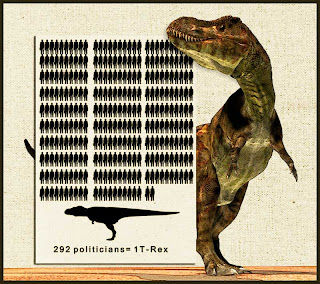 In the film Jurassic park there's a great scene where the T-Rex chomps down on a lawyer and seems to really enjoy it. Taking this to the obvious conclusion James Farlow in his book 'The complete Dinosaur' worked out it would take 292 lawyers each weighing 68 kilograms 150 LBs) to keep a 4 ton T-Rex fed for a year.

Though lawyers are one option I would prefer to start with politicians as they tend to be fatter, more stupid and cause most of the problems in the world.

Even as a long time vegetarian I think its a great idea and we should be making every effort on the cloning front to bring them back, we could even keep one at the houses of parliament, it would really bring in the tourists.

Anyway I thought this called for a ‘new scientist' type diagram to really bring home the benefits.
Posted by Artbyphil at 1:49 pm 4 comments: 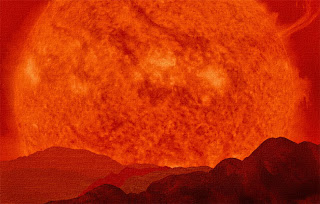 Billions of years in the future, when our sun starts to run out of fuel it will become a red giant star its largest radius being about 256 times its current size and it will expand to consume the Earth's orbit.

Astronomers estimate that it will expand past the Earth's orbit in just a billion years. The heating Sun will evaporate the Earth's oceans away, and then solar radiation will blast away the hydrogen from the water. The Earth will never have oceans again. It will eventually become molten.

Still a while to go yet though and of course we may have gone extinct a long time before then anyway or on a more positive note if we survive found a way off the planet:)
Posted by Artbyphil at 1:57 pm 1 comment: 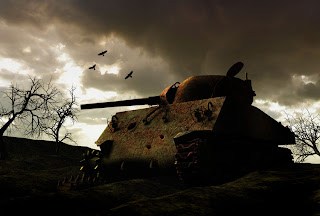 This s an illustration I did a while ago but it seemed to fit with this topic so well I thought I'd use it.

This was another of the old derelict things I like so much and another chance to do some weathered texturing.

I saw a documentary recently in which they said that there are still lots of old tanks from WWII abandoned and rusting away in various places round the world. Recently though people have cottoned on to the fact that they are worth a lot of money so they are now being recovered for museums and for restoration.

Personally I think they can say more being left where they are.
Posted by Artbyphil at 12:29 am 2 comments: