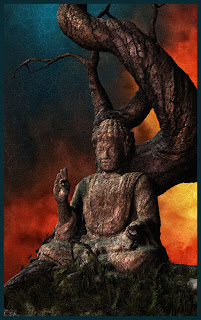 Well I wasn't sure what to do for this week but this seemed to cover the topic pretty well. I could have filled pages with brilliant quotes from the Buddha here but in the end settled for just the one.
Posted by Artbyphil at 10:13 pm 3 comments: 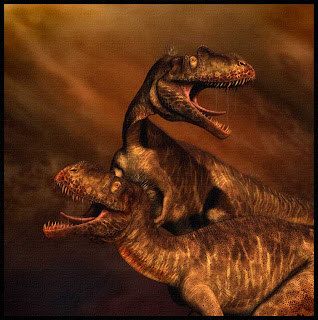 As you can no doubt tell from some of my other illustrations this subject was right up my street:) I already had lots of images I could use for it but decided it would be fun to do a new one.

This was the first dinosaur described from a bone in 1676 and the subject of the first ever scientific description of a dinosaur on record published by William Buckland in 1822.

Megalosaurus (meaning great lizard) was a large meat eating theropod that lived in what is now the south of England , France and Portugal during the middle Jurassic period, nearly 170 million years ago.

Despite being famous for being first it is still not that well known and no complete skeleton has yet been found, though with what is available and comparing it with other more complete fossils of other related dinosaurs it's possible to arrive at a reasonable idea of what it may have looked like.

It also shows how our understanding of dinosaurs has changed over the years, the early reconstructions depicting it has a large heavy four footed, crocodile headed type creature. Though this may seem strange now at the time with very little evidence to go on, no other dinosaurs to compare it to and the only large reptiles known being crocodilians it was a reasonable assumption.

It is in fact surprisingly recent that the dynamic view of dinosaurs we have today came about. I remember books in the 60s and 70s (I've still got few, I love old dinosaur books)still portraying the large , dull witted tail dragging monsters and long necked swamp bound sauropods.(and even more worryingly I still see the odd kids book today that gets lots of things wrong!)
Posted by Artbyphil at 5:35 pm 6 comments: